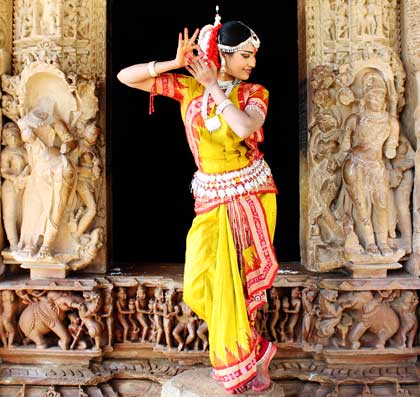 Bithika Mistry started learning dance from early childhood, first learning folk dance and Rabindra dance which is done with the poetry and music of the poet Rabindranath Tagore. She later studied Odissi dance intensively and also completed a Masters in it from Rabindrabharati University. She also completed a Masters degree in Bengali Literature from Calcutta University and has qualified in the subject of dance in the UGC Net examination.

She has given many solo performances in India and abroad and conducted workshops in Germany, Switzerland, France, Sweden, Denmark. and Austria. She performed her own solo dance choreography with dhrupad at the Khajuraho dance festival in 2014.

In association with her guru Arundhati Roy Bithika has performed in Vietnam in a tour organized by The Indian Council for Cultural Relations in 2010 and has performed and done a workshop at the National University of Singapore in 2011 and in numerous venues and festivals in India like Shantipur classical conference and the Uday Shankar Festival, Kolkata in 2007, Parampara festival in Kolkata in 2010, Karur Nrityanjali Festival in Tamil Nadu 2011 and The U. P. Sangeet Natak Akademi Lucknow 2011.

She has taught dance since many years to students individually and in academic institutions and schools and some of her students have also given professional performances and won prizes in dance competitions.